At May 26 2021, by taking into account pros and cons, Window Maker team has decided to move our IRC channel from Freenode to Libera.chat network. Reasons for such move was recent major changes how Freenode IRC network is being operated. See Community section for details.

Window Maker 0.95.4 was released on January 3rd 2013. There was a major code cleanup related to icons, some changes in WPrefs, the addition of a new “Center” placement strategy, support for _NET_FRAME_EXTENTS, the removal of CPP dependency to process menu files and small fixes and improvements all around.

Window Maker 0.95.3 was released on May 16th 2012. This release fixes a regression which would cause more than one instance of an application to start (under some circumstances) when using menu shortcuts. The window maximization procedures now have a more intuitive behavior with respect to remembering the old geometry and going back to it. Furthermore, there are some other small fixes and cleanups.

Window Maker 0.95.2 was released on February 14th 2012, and it contains just a few commits on top of 0.95.1. They were necessary to fix a few issues like ‘make dist’ not compiling. Furthermore a few more code cleanups slipped in.

The last official Window Maker release was version 0.92.0 from 2005, and version 0.95.1 contains many bug fixes and also a few new features.

The following list is incomplete, but should give a first-order approximation to the new features in this release. For the truly curious among you, reading through git log is the only complete source of information.

Window Maker 0.92.0 was already very stable, but many bugs were fixed in this release. A very incomplete list is given below, and as time permits it will be updated (including links to the commits) in the future. But the message now is that if you don’t like bugs, use version 0.95.1.

A lot of effort was put into cleaning up the code, with lots of code removal and tidying things up. The following output should give you an idea of the development in the last cycle:

The first shortstat is really everything, including the (huge) patch generated in this commit from 2009, which changed the old sources to the linux kernel coding style. The second shortstat contains the summary of development afterwards – but included is the addition of a debian folder with files summing around ~20k lines. The full diffstat for the second command can be seen here. 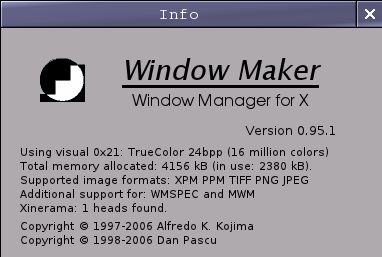